Most boaters on Red Rock Lake realize that they are traveling on the old course of the Des Moines River, impounded by the Red Rock Dam constructed by the U.S. Army Corps of Engineers in 1969.  Few, however, realize that they are also traversing another river, one whose flow ended 300 million years ago.  Its ancient riverbed now stands above the modern lake in the form of tall sandstone bluffs admired by passing boaters while its ancient floodplain reclines in low-lying beds of mudstone and shale, its unremarkable topography ignored by nearly everyone.

During the Pennsylvanian era of geologic history, the river flowed swiftly westward, transporting water and sediment from the high and rising Appalachian Mountains to the proto-Pacific Ocean whose embayment occupied what is now Wyoming and Nebraska.  Dropping its sand-rich load at low flow, the river constructed new sandbars on top of previously deposited sandbars and were later buried by still newer sandbars.  Loose sand pushed over the top of bars by currents formed slanting cross-beds draped across their downstream ends.  Compressed by successive burials and cemented with mineral-rich groundwater, the stack of sandbars ultimately lithified over millenia into sandstone, their downstream-pointing crossbeds enabling modern geologists to deduce the direction of flow of the ancient river.  Iron-rich groundwater percolated unevenly through the bedrock, staining the sandstone red in places, becoming the namesake of Red Rock Lake.
﻿

﻿The floodplain of the ancient river also received successive layers of sediment, but of muddy silt and clay instead of sand, deposited whenever the river overflowed its banks.  Forests of now-extinct trees grew prolifically in the swampy flats of the floodplain.  As they died, their organic matter decomposed only partially in the anerobic swamp water, eventually turning into coal.  Traces of the long-vanished trees, preserved as casts and impressions in the rocks, represent a fossil forest that thrived some 300 million years ago.  The low, muddy shores of Red Rock Lake hide the remains of the Pennsylvanian coal swamps where fossils of the ancient trees slowly weathering out of their encasing rocks are sometimes discovered by attentive beachcombers.

﻿
Kayaking on Red Rock Lake can be a time-bending experience if you appreciate the full range of features displayed along its shoreline, including rugged bluffs and deceptively subtle lowlands.  Both represent the ruins of the same ancient landscape of swamp forests flanking a swift river on its way to a nearby sea.  To me, it is like exploring the labyrinth of an exhumed temple, discovering relics in newly found chambers.  I have found them high on the bluffs where I lifted my boat onto sandstone outcrops and in the soft, wet quicksands of shale-footed beaches, hidden in plain sight.  The world is a big and interesting place, made bigger and more interesting by the presence of past worlds alongside the present one! 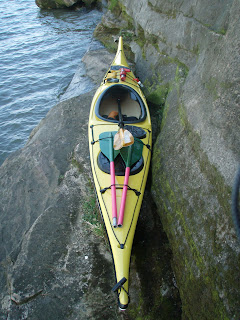 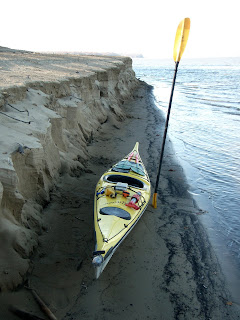