Expedition to Determine the Fate of the Peace Tree 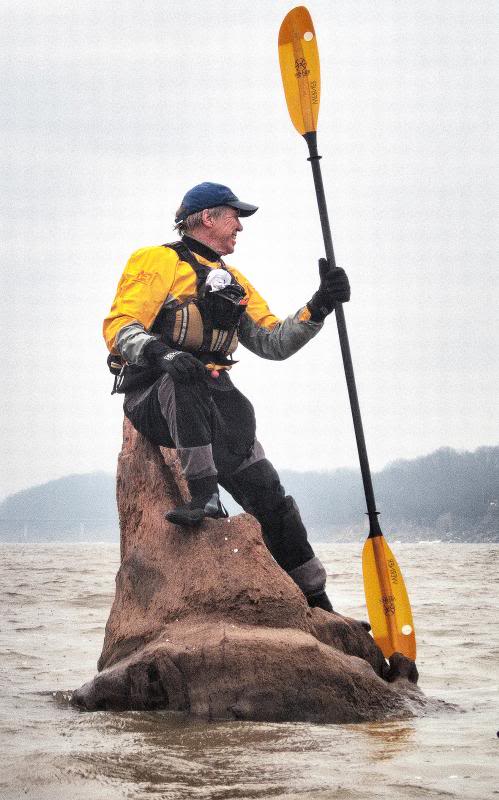 In 1822, General William Ashley published an ad in the Missouri Gazette recruiting adventurers into the American Fur Company for the purpose of exploring the headwaters of the Missouri River for beaver:


Enterprising Young Men
The subscriber wishes to engage ONE HUNDRED MEN, to ascend
the river Missouri to its source, there to be employed for one,
two, or three years. For particulars enquire of Major Andrew
Henry, near the Lead Mines, in the County of Washington, (who
will ascend with, and command party) or to the subscriber at
St. Louis.
Wm. H. Ashley

In 2013, I employed his advertising style (while updating cultural assumptions about qualifying ages and genders) in an email to recruit adventurers into the Red Rock Armada (a fellowship of area kayakers) for the purpose of exploring the upper part of Lake Red Rock to determine the fate of the "Peace Tree", a local landmark associated with the frontier history of Iowa:


Enterprising Not-Quite-So-Young Men and Women
The subscriber wishes to engage TEN MEN AND WOMEN, to ascend
the reservoir Red Rock to its source, there to be entertained for one,
two, or three hours. For particulars enquire of Doctor Brian
Lange, near the Canoe & Kayak Launch, in the County of Marion, (who
will ascend with, and command party) or to the subscriber at
Indianola.
J.A. Pearson

Our foray was prompted by rumors among the natives that the Peace Tree had finally fallen, fatally injured by ice and old age. During a reconnaisance to the Painted Rocks last week, our scouts had scanned the last known vicinity of the Peace Tree with binoculars, spotting a mysterious, ice-draped object far across the strait.  Unable to identify it from long distance, they had recommended an on-site survey by boat.  Answering the call, eleven enterprising kayakers mustered at the Elk Rock trailhead on Saturday morning. Our "Expedition to Determine the Fate of the Peace Tree" was now assembled and ready for action.

Mist veiled the landscape, rendering familiar landmarks into indiscernible blobs and enhancing our sense of exploring a strange new country. Strapped to the deck, my GPS recorded our route as we paddled across Teter Bay, rounded the headland, passed under the Mile Long Bridge, and curved away from the coast to approach the mysterious object we had scoped from shore the week before. 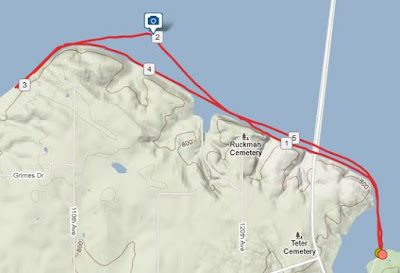 As we neared, a dark, tombstone-shaped stump loomed out of the mist. Familiar but strange at the same time, it was the remains of the Peace Tree: still present but much diminished from its former grandeur. Its woody girth resembled the diameter of the tree trunk we had come to know over our years of visiting, but its top was scarcely above the eye level of a kayaker, completely unlike the look-up-at-me aspect of the tree we had known.  I paddled up to the stump and grasped its edge. Recognizing the now tilted surface of a formerly flat platform just above the waterline, I acted on the impulse to climb onto the stump, retaining my paddle as a staff.  Brian shepherded my boat away as I stood up and surveyed the scene (top photo). 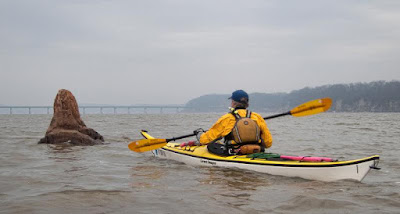 If I was the hero of a Hollywood movie, this would have been the point at which I suddenly clutch my forehead as a swarm of alien images - accompanied by weird, unsettling music - swirls through my confused brain: ancient visions of an undammed river, a tall sycamore emerging above unbroken forest, Indian villages, a string of blue-coated soldiers, treaties and trading posts, upheaval, sorrow, a new world, big floods, more upheaval and sorrow, deepening water... and a giant, dead tree slowly dismembering with ice and old age.  It would have been the memories of the Peace Tree pouring into my mind.  Rendered into slow motion, tickmarked by year and age, the tree's life would unfold like this:

1500 - (tree age 0) - Peace Tree seed germinates, then grows uneventfully for over three centuries.  Native Americans hunt in the surrounding forest, traveling up and down the Des Moines River waterway.

1835 (tree age 335) - "One summer day, the Indians beheld a long line of white men on horseback.  They were U.S. Dragoons, a cavalry unit sent out to explore the Sac and Fox lands preparatory to buying them..." (quote from Harriet Heusinkveld, "Ghost Towns of the Des Moines River Valley", Take This Exit, 1989). 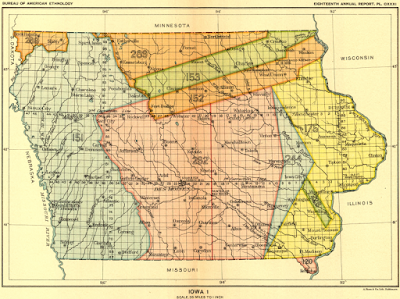 1843 (age 343) - Indians vacate lands east of the Red Rock Line; town of Red Rock established quarter-mile east of Line. Although not an official point of reference for the Red Rock Line, the Peace Tree (standing immediately west of the boundary) becomes a local landmark approximating its location. (See map in this weblink.)

1845 (age 345)- May 1st: Indians vacate land west of Red Rock Line, relocating to Kansas; October 10th: "At midnight, white settlers in wagons and on horseback line up at the Red Rock Line awaiting the shooting of guns to be fired by the Dragoons to announce that they could go in and claim the land." (quote from Huesinkveld) 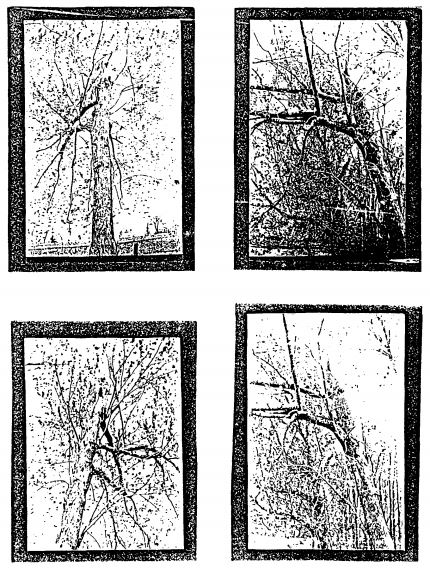 1947 (age 447)- Big flood submerges town of Red Rock; Army Corps of Engineers begins planning flood control reservoir to be named Lake Red Rock in keeping with its tradition of bestowing the reservoir with the name of the nearest downstream town. 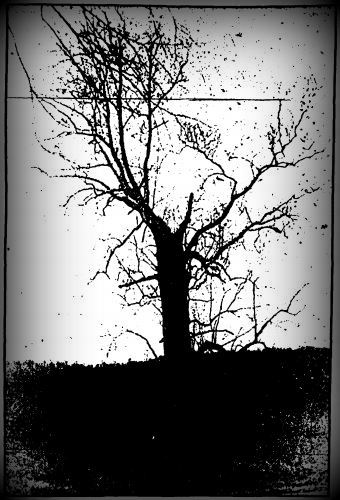 1969 (age 469) - Big flood submerges town of Red Rock, but this pool is permanent. Between 1947 and 1969, the Army Corps decided to move the location of the proposed dam 8 miles downstream to Howell Station (thus capturing the large inflow of Whitebreast Creek). The town of Red Rock ends up on the wrong side of the dam although the Army Corps retains the previously chosen name of "Lake Red Rock" (evidently eschewing "Lake Howell"). The Peace Tree is killed by lake water rising 2 feet above its roots.

"This giant tree at shoulder height measures 22 ft.-ll in. in circumference, has lived for hundreds of years on the Des Moines river bottom in Marion County near, where the town of Red Rock, Iowa, used to be... The age of the giant tree is unknown.... but it is certain, however, that it watched the parade of historic Indians, the Sioux, Iowa's Pottawattamie, Winnebagos, as well as the Sacs and Foxes, as they passed in war and peace from the Red Rocks on the Des Moines River, from which the old tree springs, are well known in the tales and legends of these people who lived in the town of Red Rock, Iowa... Prior to 1842, John Jordan's trading post, in the shade of this big tree, exchanged gun powder, trinkets, and whiskey, for the Indian's fur catch.... It watched the settlers cross the Red Rock line at Midnight October 11th, 1845, when the territory was opened to white settlers...It watched the settlement of Red Rock become a bustling river town where, saloons, murder, robbery, were quite commonplace." 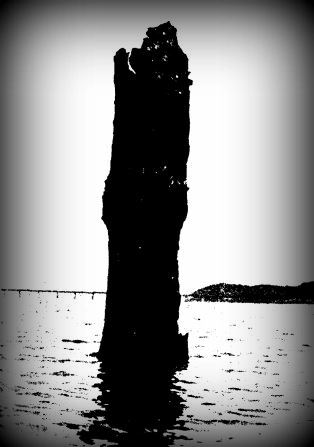 1992 (age 469 + 23) - Lake level is raised 8 feet to offset loss of volume from siltation.  Kayakers can now paddle up to the Peace Tree by water.  The lower bole of dead Peace Tree is submerged in 10 feet of water, initially leaving ~25 feet standing above the new pool level, but decay and breakage incrementally reduce its stature over the subsequent decades. Anticipating the disappearance of the Peace Tree, boaters in 2006 and 2007 decorate the tree with commemorative tapestry.

2013 (age 469 + 44) - Another segment of the Peace Tree snaps off during winter; remaining short stump severely tilted.

The visions cease as suddenly as they began as I snap out of my Hollywood alter-ego.  There are no ancient forests, Indian villages, or historians, just me standing on the stump of the Peace Tree, enjoying a day of kayaking with my friends.  Remembering our collective persona as explorers, I pose for a "summit photo" with our Red Rock Armada flag and record in my journal that "the Expedition to Determine the Fate of the Peace Tree was a success!  Tilted and diminished, but still present." 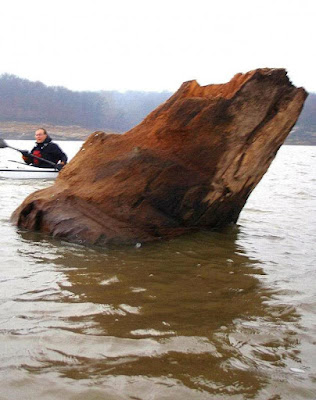 As we paddle away from the tree, however, something in the back of my mind tells me to check out the history of the Peace Tree when I get home.  There might be an interesting story there.